Web Site Displays Raw Uncensored Iraq War Footage See the War, After an Ad for the ArmyThis week the Web site ifilm.comintroduced a new “channel” called WarZone (www.ifilm.com/warzone) with film clips from World War II, Vietnam, Israel and Iraq. Looking at the selection of videos about Iraq, it’s hard to say which are scarier: the clips themselves or the advertisements that run with them. 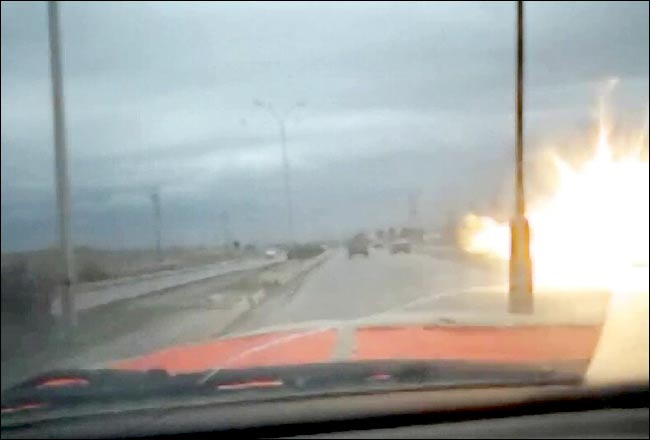 Let’s start with the clips. Click on one, and first you’ll get an ad: as rain falls, a father speaks quietly to his son. “You’ve changed, man. … On the train back there, you did two things you’ve never done before … at least not at the same time. Shook my hand and looked me square in the eye. Where’d that come from?” The United States Army logo flashes on the screen.

Then it’s on to the clip you’ve chosen. From inside a car, you see a roadside bomb attack. The video, shot through the car’s windshield, begins with a speedy drive down a Baghdad road. After several seconds, there’s an orange explosion, then lots of yelling, gunfire and a shattered windshield. The written description explains that the victims of the ambush were members of a private British security firm. No one inside the car died, but one Iraqi outside did.

Next in the lineup is an Al Jazeera video of a missile attack on a British C-130 plane, as broadcast on MSNBC. It’s blurry and jumpy. You see a missile go up and then you see the wreckage. The talking heads cast doubt on the authenticity of the film.

Now it’s on to a promotional video for the Mahdi Army, a Shiite militia. The clip, nearly four minutes long, shows lots of guys, presumably recruits, waving guns. Much of it is boring, since you can’t understand what they’re saying. And before you can see it, you have to pay your dues once again. A young American tells his mother, “I found someone to pay for me to go to college.” Guess who.

If you want to watch the mujahedeen attack a Mi-8 chopper, first you must listen to a young man having an earnest talk with his father at a pool table: “I’m going to be part of something that’s important.” The father is doubtful. “Good training?” The son reassures him: “It’s the Army.”

A lot of the clips that fill the gap between the commercials (the Army is just one of many advertisers) are standard stuff, though there are a few horrific videos, set to music, made by soldiers and marines. (“Celebrating death is not the exclusive domain of beheaders and Al Jazeera,” the caption on one says.)

And some of the videos from the field are pretty unusual. In what appears to be an insurgent’s movie of his own sniper attack, an American soldier is felled, gets up, and then ducks and runs behind a jeep. You hear shouting in Arabic. The caption for the clip tells you that the victim, Pfc. Stephen Tschiderer of the Army, was not killed. In fact, he tracked down the assailant, wounded him and then gave him medical care.

A heart-thumping 33-second video titled “Ambush in Iraq” was shot from a vehicle attacked while speeding through traffic. The dialogue, yelled at the driver, gives a sense of the drama: “Go go go, go go go. … Big one. Watch the VW. … More coming, more on the route.” Then, finally: “It’s all right. Everybody’s good.”

One of the disturbing things about the combat videos is that there’s generally no mention of provenance. Why not? Many of the films shot in Iraq came in anonymously, explained Roger Jackson, ifilm’s vice president for content. Although the editors at ifilm look over submissions to weed out anything too ghoulish (like beheadings), he said, “we don’t interrogate the sources.”

Some of the clips critical of the war, though not all, are stashed in a special section within the WarZone channel called “Spin Zone.” There you will find a Norwegian rap group’s attack on President Bush, “Kill Him Now,” and a clip titled simply “Rumsfeld Caught Lying.”

Other antiwar clips are tucked away even further. They’re not on WarZone and can be found only by searching for “Iraq” from ifilm’s homepage. One is a short and biting history of Saddam Hussein’s long relationship with the C.I.A., set to the tune “Thanks for the Memory.” Another is a film clip from the documentary “The Ground Truth” in which soldiers who have lost limbs during the war discuss what happened. One woman’s leg was crushed because her Humvee had no doors.

But if you like to watch the Army’s toys at work, the “Latest” section of WarZone is the place to be. There you’ll find “angel decoys” that repel heat-seeking missiles, a “bunker buster” bomb, and an F-18 Hornet fighter racing against a Formula One car. You can even watch a couple having sex in a convertible as seen by an OH-58D surveillance camera. The video lasts nine minutes.

Watching these videos, you might start to think you have stumbled into a particular demographic group. You would be right. Mr. Jackson noted that ifilm’s audience is “60 percent male; it skews young, toward the 18-to-38-year-old group; and it’s overwhelmingly North American, some 90 percent.”

This entry was posted in Veterans for Common Sense News. Bookmark the permalink.
%d bloggers like this:
WordPress Appliance - Powered by TurnKey Linux