MORGANTOWN, W.Va. — Jeremy Harrison sees the warning signs in the Iraq war veterans who walk through his office door every day — flashbacks, inability to relax or relate, restless nights and more. 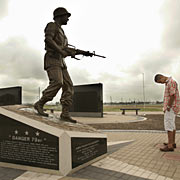 Jesus Bocanegra, 23, who has been diagnosed with post-traumatic stress disorder, visits the South Texas War Memorial.

He recognizes them as symptoms of combat stress because he’s trained to, as a counselor at the small storefront Vet Center here run by the U.S. Department of Veterans Affairs. He recognizes them as well because he, too, has faced readjustment in the year since he returned from Iraq, where he served as a sergeant in an engineering company that helped capture Baghdad in 2003.

“Sometimes these sessions are helpful to me,” Harrison says, taking a break from counseling some of the nation’s newest combat veterans. “Because I deal with a lot of the same problems.”

As the United States nears the two-year mark in its military presence in Iraq still fighting a violent insurgency, it is also coming to grips with one of the products of war at home: a new generation of veterans, some of them scarred in ways seen and unseen. While military hospitals mend the physical wounds, the VA is attempting to focus its massive health and benefits bureaucracy on the long-term needs of combat veterans after they leave military service. Some suffer from wounds of flesh and bone, others of emotions and psyche.

These injured and disabled men and women represent the most grievously wounded group of returning combat veterans since the Vietnam War, which officially ended in 1975. Of more than 5 million veterans treated at VA facilities last year, from counseling centers like this one to big hospitals, 48,733 were from the fighting in Iraq and Afghanistan.

Many of the most common wounds aren’t seen until soldiers return home. Post-traumatic stress disorder, or PTSD, is an often-debilitating mental condition that can produce a range of unwanted emotional responses to the trauma of combat. It can emerge weeks, months or years later. If left untreated, it can severely affect the lives not only of veterans, but their families as well.

Of the 244,054 veterans of Iraq and Afghanistan already discharged from service, 12,422 have been in VA counseling centers for readjustment problems and symptoms associated with PTSD. Comparisons to past wars are difficult because emotional problems were often ignored or written off as “combat fatigue” or “shell shock.” PTSD wasn’t even an official diagnosis, accepted by the medical profession, until after Vietnam.

There is greater recognition of the mental-health consequences of combat now, and much research has been done in the past 25 years. The VA has a program that attempts to address them and supports extensive research. Harrison is one of 50 veterans of the Iraq and Afghanistan wars hired by the VA as counselors for their fellow veterans.

‘It takes you back there’

Post-traumatic stress was defined in 1980, partly based on the experiences of soldiers and victims of war. It produces a wide range of symptoms in men and women who have experienced a traumatic event that provoked intense fear, helplessness or horror. (Related story: Iraq injuries differ from past wars)

The events are sometimes re-experienced later through intrusive memories, nightmares, hallucinations or flashbacks, usually triggered by anything that symbolizes or resembles the trauma. Troubled sleep, irritability, anger, poor concentration, hypervigilance and exaggerated responses are often symptoms.

Individuals may feel depression, detachment or estrangement, guilt, intense anxiety and panic, and other negative emotions. They often feel they have little in common with civilian peers; issues that concern friends and family seem trivial after combat.

Harrison says they may even hit their partners during nightmares and never know it.

Many Iraq veterans have returned home to find the aftermath of combat presents them with new challenges:

•Jesus Bocanegra was an Army infantry scout for units that pursued Saddam Hussein in his hometown of Tikrit. After he returned home to McAllen, Texas, it took him six months to find a job.

He was diagnosed with PTSD and is waiting for the VA to process his disability claim. He goes to the local Vet Center but is unable to relate to the Vietnam-era counselors.

“I had real bad flashbacks. I couldn’t control them,” Bocanegra, 23, says. “I saw the murder of children, women. It was just horrible for anyone to experience.”

Bocanegra recalls calling in Apache helicopter strikes on a house by the Tigris River where he had seen crates of enemy ammunition carried in. When the gunfire ended, there was silence.

But then children’s cries and screams drifted from the destroyed home, he says. “I didn’t know there were kids there,” he says. “Those screams are the most horrible thing you can hear.”

At home in the Rio Grande Valley, on the Mexico border, he says young people have no concept of what he’s experienced. His readjustment has been difficult: His friends threw a homecoming party for him, and he got arrested for drunken driving on the way home.

“The Army is the gateway to get away from poverty here,” Bocanegra says. “You go to the Army and expect to be better off, but the best job you can get (back home) is flipping burgers. … What am I supposed to do now? How are you going to live?”

•Lt. Julian Goodrum, an Army reservist from Knoxville, Tenn., is being treated for PTSD with therapy and anti-anxiety drugs at Walter Reed Army Medical Center in Washington. He checked himself into a civilian psychiatric hospital after he was turned away from a military clinic, where he had sought attention for his mental problems at Fort Knox, Ky. He’s facing a court-martial for being AWOL while in the civilian facility.

Goodrum, 34, was a transportation platoon leader in Iraq, running convoys of supplies from Kuwait into Iraq during the invasion. He returned to the USA in the summer of 2003 and experienced isolation, depression, an inability to sleep and racing thoughts.

“It just accumulated until it overwhelmed me. I was having a breakdown and trying to get assistance,” he says. “The smell of diesel would trigger things for me. Loud noises, crowds, heavy traffic give me a hard time now. I have a lot of panic. … You feel like you’re choking.”

•Sean Huze, a Marine corporal awaiting discharge at Camp Lejeune, N.C., doesn’t have PTSD but says everyone who saw combat suffers from at least some combat stress. He says the unrelenting insurgent threat in Iraq gives no opportunity to relax, and combat numbs the senses and emotions.

“There is no ‘front,’ ” Huze says. “You go back to the rear, at the Army base in Mosul, and you go in to get your chow, and the chow hall blows up.”

Huze, 30, says the horror often isn’t felt until later. “I saw a dead child, probably 3 or 4 years old, lying on the road in Nasiriyah,” he says. “It moved me less than if I saw a dead dog at the time. I didn’t care. Then you come back, if you are fortunate enough, and hold your own child, and you think of the dead child you didn’t care about. … You think about how little you cared at the time, and that hurts.”

Smells bring back the horror. “A barbecue pit — throw a steak on the grill, and it smells a lot like searing flesh,” he says. “You go to get your car worked on, and if anyone is welding, the smell of the burning metal is no different than burning caused by rounds fired at it. It takes you back there instantly.”

•Allen Walsh, an Army reservist, came back to Tucson 45 pounds lighter and with an injured wrist. Since he was unable to get his old job back as a reputable driving school instructor back, he started his own business instead, a mobile barbecue service. He’s been waiting nearly a year on a disability claim with the VA.

Walsh, 36, spent much of the war in Kuwait, attached to a Marine unit providing force protection and chemical decontamination. He says he has experienced PTSD, which he attributes to the constant threat of attack and demand for instant life-or-death decisions.

“It seemed like every day you were always pointing your weapon at somebody. It’s something I have to live with,” he says.

At home, he found he couldn’t sleep more than three or four hours a night. When the nightmares began, he started smoking cigarettes. He’d find himself shaking and quick-tempered.

“Any little noise and I’d jump out of bed and run around the house with a gun,” he says. “I’d wake up at night with cold sweats.”

A recent Defense Department study of combat troops returning from Iraq found that soldiers and Marines who need counseling the most are least likely to seek it because of the stigma of mental health care in the military. 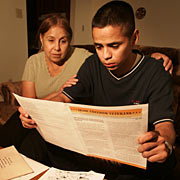 By Robert Deutsch, USA TODAYJesus Bocanegra is waiting for the VA to process his disability claim.

One in six troops questioned in the study admitted to symptoms of severe depression, PTSD or other problems. Of those, six in 10 felt their commanders would treat them differently and fellow troops would lose confidence if they acknowledged their problems.

A report this month by the Government Accountability Office said the VA “is a world leader in PTSD treatment.” But it said the department “does not have sufficient capacity to meet the needs of new combat veterans while still providing for veterans of past wars.” It said the department hasn’t met its own goals for PTSD clinical care and education, even as it anticipates “greater numbers of veterans with PTSD seeking VA services.”

Harrison, who was a school counselor and Army Reservist from Wheeling, W.Va., before being called to active duty in January 2003, thinks cases of PTSD may be even more common than the military’s one-in-six estimate.

He is on the leading edge of the effort to help these veterans back home. Harrison and other counselors invite Iraq and Afghanistan veterans to stop in to talk. Often, that leads to counseling sessions and regular weekly group therapy. If appropriate, they refer the veterans to VA doctors for drug therapies such as antidepressants and anti-anxiety medications.

“First of all, I let them talk. I want to find out all their problems,” he says. “Then I assure them they’re not alone. It’s OK.”

Fifty counselors from the latest war is a small number, considering the VA operates 206 counseling centers across the country. Their strategy is to talk with veterans about readjustment before they have problems, or before small problems become big ones. The VA also has staff at 136 U.S. military bases now, including five people at Walter Reed, where many of the most grievously injured are sent.

The toughest part of helping veterans, Harrison says, is getting them to overcome fears of being stigmatized and to step into a Vet Center. “They think they can handle the situation themselves,” he says.

Vet Centers provide help for broader issues of readjustment back to civilian life, including finding a job, alcohol and drug abuse counseling, sexual trauma counseling, spouse and family counseling, and mental or emotional problems that fall short of PTSD.

“A Vietnam veteran myself, it would have been so great if we’d had this kind of outreach,” says Johnny Bragg, director of the Vet Center where Harrison works. “If you can get with the guys who come back fresh … and actually work with their trauma and issues, hopefully over the years you won’t see the long-term PTSD.”

In all cases, the veteran has to be the one who wants to talk before counselors can help. “Once they come through the door, they usually come back,” Harrison says. “For them, this is the only chance to talk to somebody, because their families don’t understand, their friends don’t understand. That’s the big thing. They can’t talk to anyone. They can’t relate to anyone.”

This entry was posted in Veterans for Common Sense News and tagged Afghanistan. Bookmark the permalink.
%d bloggers like this:
WordPress Appliance - Powered by TurnKey Linux