Things probably should have turned out differently for Samantha Schilling.

The stories she tells have dark beginnings and could have had, under different circumstances, dark endings — as so many stories for those in the military do.

Schilling, now 31, served in the U.S. Navy from 1999 to 2003. She was never deployed but worked as an information systems technician at Naval Station Norfolk in Virginia.

Several of her friends were killed during the 2000 al Qaedabombing of the USS Cole in Yemen, which left 17 dead and at least 37 injured. Some of the injured were transferred to her base in Norfolk.

Many of the survivors suffered from mental trauma after the bombing. One of them, a man who had been aboard the ship, attacked Schilling and attempted to rape her.

That assault drove home the impact that active duty had on her colleagues’ mental state.

“I experienced military sexual trauma, and that just inspired me,” she said. “Coming back into civilian life, you’re not the same person you were in the military. … You carry with you all these burdens, all these stressors.”

Schilling was released from service with an honorable medical discharge in 2003. Since that time, she has taken on a personal mission to help others who need counseling after military service. She’s nearly completed a masters in a joint military psychology and neuropsychology program at the Adler School of Professional Psychology in Chicago and plans to finish her doctorate degree in 2015. 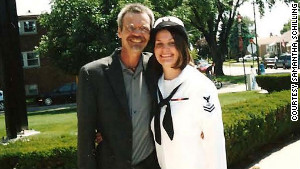 Samantha Schilling, with her father, lost several friends in the USS Cole bombing.

“I’m determined to be able to be helpful to others,” she said. “Helping others helps me. … I think therapy can help people adapt to civilian life again instead of maladapt. People who have PTSD and other (issues) can maladapt and cause trouble in the civilian world.”

It’s no secret the U.S. military has struggled to adequately support its troops after they leave active duty.

A new study (PDF) shows that only about half of U.S. service members deployed to Iraq and Afghanistan diagnosed with PTSD received any treatment for it.

And statistics from the U.S. Department of Veterans Affairs show that about 18 veterans commit suicide every day.

The VA has stepped up efforts to expand care and recently announced plans to hire 1,600 more mental health professionals and 300 support staff members to help meet the increasing demand for services.

But some former active-duty service members aren’t waiting for help to arrive.

Veterans have turned to psychology to become mental health professionals, and they’re filling in gaps in veteran care that government and civilian efforts have left open. And while they are still rare, programs to train them are slowly emerging at universities and nonprofit organizations around the United States.

Born a year ago with funding from the Department of Veteran Services in Massachusetts, a program through the Massachusetts School of Professional Psychology called Train Vets to Treat Vetshas recently picked up steam. It has several goals: mentoring new veterans, providing services to at-risk and homeless veterans, and educating the public about ways they can help.

“As the stigma (of seeking professional mental health treatment) breaks down more and more, and more veterans are willing to come into treatment, (the need) is just going to increase and increase,” said Robert Chester, 25, who served in the National Guard for six years and became a student at the Massachusetts School of Professional Psychology.

“That’s why we want to get more veterans into mental health, both to break down the stigma and get more clinicians out there.”

It was clear that folks … want to talk about emotional issues with somebody that understands their culture. Nick Covino

Chester is now an admissions assistant at Train Vets to Treat Vets.

Starting the program was a joint effort between the Massachusetts Department of Veterans’ Services and veterans (Chester and colleagues Greg Matos and Norman Tippens) who are also students at at the school.

“We, as the veteran students, wanted to see that we could create more of a military cohort at our school,” Chester said. “We really wanted to put something together where we can help our fellow veterans by providing mental health services in that specific way.”

Since the program’s start, Chester has fielded e-mails every day from veterans who want to get involved. Six will enroll in the school’s fall class.

Massachusetts School of Professional Psychology President Nick Covino says the idea for the program came from a Latino mental health program the school began about eight years ago.

Having student veterans in the program has been beneficial not only to the veterans it has helped but to non-veteran graduate students who want to specialize in veteran care.

From casual conversations to exchanging papers and working on doctoral projects together, a collaboration between veteran and non-veteran students is “radically changing the academic culture of our learning community,” Covino said.

Leaning over an occasionally beeping laptop in a downtown Chicago office building, Robert Kyle rolls up the sleeves of a blue button-down shirt to reveal heavily tattooed forearms.

On one, a drawing that looks like the Grim Reaper. On the other, columns of initials. There are so many, his arm is more ink than skin.

He explains that they’re the initials of friends who died alongside him while deployed in Afghanistan and Iraq. There are 53, he says. But there are more to add he hasn’t gotten around to yet.

Kyle, who goes by his first and middle name online for security reasons, has his own set of challenges. At 26, he has survived three deployments and sustained a traumatic brain injury. He enlisted in the Army when he was 17 and served from 2003 to 2009.

Although he still carries burdens from his deployment, since his return, he hasn’t forgotten about his military family. Some, he knows personally; others, he’s only met through that beeping laptop. He has dedicated his life to helping veterans connect to one another and improve their mental health.

Kyle works as a peer coach at Vets Prevail, a free online forum and multistep mental health program. It was founded in 2009 by a small group of professionals, almost all of them veterans.

While working as a peer coach, Kyle is pursuing a graduate degree in psychology from DePaul University.

Six salaried professionals work at Vets Prevail, as well as three peer coaches who directly interact with veterans online. Although the peer coaches are not doctors, they complete a training process, and most important, Kyle says, they have all served on active duty.

“When they hear that you have done what they’ve done, (veterans) tend to open up more than someone that has never been in a combat zone. That opens a little more trust,” Kyle says. “Veterans are doing this for veterans.”

Kyle retired from service in 2009 after his injury and went back to school, earning a degree in psychology from Lees-McRae College in North Carolina.

Seeking help from a non-veteran is like going to a marriage counselor that has never been married. Jon Neely

Since that time, he has worked to develop Vets Prevail. Now, more than 8,000 veterans from about 5,000 ZIP codes turn to the site to chat and learn coping mechanisms, and membership is rapidly increasing.

Justin Savage, a 32-year-old Army veteran who works as the head of program development for Vets Prevail, says a large part of that success is the users’ assurance that the experts on the other side of the computer screen are speaking their language.

“We live and breathe accountability,” said Savage, who returned from Iraq in 2005. “Having vets do it really brings a new level.”

It makes sense that veterans would want to become mental health professionals, psychologist Joe Troiani says. In a military culture built on camaraderie, the desire to help a fellow veteran is natural and powerful.

Troiani, an associate professor at the Adler School of Professional Psychology, where Schilling is a student, is also a retired Navy commander and is determined to ensure that veterans get the help they need.

“If I was in trouble, I could pick up the phone and call some of my veteran friends,” Troiani said. “You and I could have served together, and I have your back, you have my back. If something happens to you, I’m going to make sure that your family is taken care of.”

The Adler School offers training for a new post-doctorate specialty called “military clinical psychology” and since the program’s start two years ago has trained about 20 students per class. The need is greater, but 20 is the cutoff to ensure the best training, Troiani says.

Taking responsibility for another human life is a familiar duty for veterans, Covino says.

“To have been in situations where they’ve needed to rely on judgment and develop a capacity for reflection, an ability to act autonomously and courageously. … Those are qualities of character you can’t teach,” Covino said.

“They haven’t experienced it”

Jon Neely, a 45-year-old living in Springfield, Illinois, has been using Vets Prevail for several months and says he logs on for about an hour every week, though when he first began using it, he logged on every day. Neely served in Kosovo from 1999 to 2000 and retired from the military in 2005.

“All too often, you go seek help from somebody that is book-learned, but they don’t understand,” he said. “They don’t know. To me, getting help or seeking help from a non-veteran is like going to a marriage counselor that has never been married. They know all the book knowledge, but they haven’t experienced it.”

Sarah Bonner, 31, an Air Force veteran who was medically discharged from Ramstein Air Base in Germany in 2006, is an active user of Vets Prevail. She says that talking to a “like-minded” person is what has kept her coming back to the site.

She has bonded with the peer coaches, to whom she refers by their first names like friends, in a way she did not expect.

“There were a couple times recently, I was at a really low point,” she said. “I was angry, and I wasn’t holding back with what I said. They don’t care. If I want to cuss out and threaten to punch something, they might say, ‘Let’s think of softer things than the wall to punch.’ … They let you talk about the stuff that’s ugly.”

Training veterans to treat other veterans does involve some risk, Chester says. If veterans are not stable themselves, they should not treat others as mental health professionals. For that reason, it can be a good idea for them to work with a psychologist even while they administer care to others.

There is so much training and hands-on experience involved in a post-doctorate program that it is highly unlikely a veteran who is still feeling unstable would make it all the way through, Troiani says. Rarely, but occasionally, a veteran will say, “This program is not a good fit for me,” he says.

But if it is a good fit, the results can be rewarding.

“Why did all of us serve if not for each other?” Kyle asked. “Just because we’re not in the military any more, it doesn’t mean we are no longer brother and sister. It’s a bond we’ll have for the rest of our lives.”