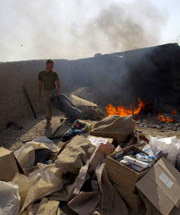 (Washington – May 3, 2019) – A bipartisan group of Congressional representatives has called for the creation of a new treatment research program relevant to veterans with toxic wounds resulting from exposure to massive open-air burn pits in Iraq, Afghanistan, and the global war on terrorism.

Together with more than a dozen other cosigners to a letter to defense appropriators, they called for the creation and funding of  the new medical research program “focused on achieving the improved health and lives of veterans affected by burn pit exposures.”

According to the letter, written testimony last year by the Veterans of Foreign Wars (VFW) said: ‘The use of open air burn pits in combat zones has caused invisible, but grave health complications for many service members…”, with, “clouds of hazardous chemical compounds that are unavoidable to those in close proximity”.

The new program would focus on three specific areas: accelerating the development of treatments for veterans affected by burn pits exposure; improve the definition, diagnosis, and scientific understanding of direct health outcomes resulting from the exposure; and assess other serious health conditions that might also have developed as a result, such as cancers and respiratory diseases.

The newly created program would be created within a unique and growing, Congressionally-directed medical research program funded under the U.S. Department of Defense Health Agency.  The request would elevate burn pits research to its own standalone program, with a Congressionally-specified budget, unique focus, and dedicated staff and mission.

“More independent research is necessary,” the VFW is quoted in the letter as having testified.

“That is why the VFW supports establishing a Congressionally Directed Medical Research Program (CDMRP) specifically for burn pits. The CDMRP has shown progress in identifying causes, effective treatments, and biomarkers for Gulf War Illness, and the VFW is confident a similar program for burn pits will help exposed veterans….”

Burn Pits 360, a veterans advocacy organization, is also quoted in the letter, explaining why it is critical the program be created outside the U.S. Department of Veterans Affairs (VA), which historically has conducted most government research related to veterans.

“Much of the valuable medical research related to burn pits exposure has been led by researchers at independent, academic medical centers including Vanderbilt University, Stony Brook University, the Deployment-Related Lung Disease Center at National Jewish Health, and others,” the organization said.

Unlike VA, which only funds research projects by VA-employed researchers, the CDMRP  funds highly competitive research proposals by qualified researchers or teams in academia, any government agency, or the private sector.

Currently, burn pit exposure is listed as one of almost 50 topic areas under a broad, “catch-all” medical research program within the Congressionally Directed Medical Research Program (CDMRP).  The CDMRP is administered by the U.S. Army’s medical research command at Fort Detrick, Maryland.

If the request is approved by the House Defense Appropriations Subcommittee, it would be included in the annual defense appropriations bill that then begins its long, complex journey through Congress.

The letter was requested by Veterans for Common Sense, Burn Pits 360, and the Sergeant Sullivan Circle, advocacy organizations that work on behalf of veterans affected by toxic wounds including burn pits exposure.

The Sergeant Sullivan Circle was named in honor of Sgt. Tom Sullivan, a Marine veteran of the Iraq War exposed to burn pits and other toxic exposures.  He was treated at Walter Reed for psychosomatic illness but died in 2009 of his undiagnosed or misdiagnosed toxic wounds , leaving behind his wife and then 3-year-old daughter.

Burn Pits 360 was co-founded by Rosie Torres and her husband LeRoy, who was diagnosed with a debilitating lung condition, constrictive bronchiolitis.  The condition is rare in the general population but frequently found via lung biopsy in veterans exposed to burn pits.

Veterans for Common Sense (VCS) is led by Anthony Hardie and other U.S. veterans of the 1991 Gulf War.  A longstanding leader on Gulf War Illness issues, another toxic wound resulting from Gulf War toxic exposures, he is quoted at length in Joseph Hickman‘s seminal work, The Burn Pits: The Poisoning of America’s Soldiers.

The VA’s official position on burn pits is that “research does not show evidence of long-term health problems from exposure” to burn pits, according to a March 6 news report published by the Military Times group.

The full text of the Congressional request is below, and is available for download (PDF) on the VCS webpage.

The House Veterans’ Affairs Health Subcommittee received testimony last year recommending the creation of peer-reviewed medical research program dedicated to burn pit exposure modeled after the successful GWIRP. Written testimony submitted by the VFW stated: “The use of open air burn pits in combat zones has caused invisible, but grave health complications for many service members, past and present. Particulate matter, polycyclic aromatic hydrocarbons, volatile organic compounds and dioxins – the destructive compound found in Agent Orange – and other harmful materials are all present in burn pits, creating clouds of hazardous chemical compounds that are unavoidable to those in close proximity … More independent research is necessary. That is why the VFW supports establishing a Congressionally Directed Medical Research Program (CDMRP) specifically for burn pits. The CDMRP has shown progress in identifying causes, effective treatments, and biomarkers for Gulf War Illness, and the VFW is confident a similar program for burn pits will help exposed veterans…. ”

Written testimony from Burn Pits 360 stated: “CDMRP is important for this treatment-focused research for several reasons. First, CDMRP has the ability to fund any qualified research team, not just those employed by the funding agency. By contrast, VA’s medical research program is solely intramural and open only to VA-employed researchers. Much of the valuable medical research related to burn pits exposure has been led by researchers at independent, academic medical centers including Vanderbilt University, Stony Brook University, the Deployment-Related Lung Disease Center at National Jewish Health, and others. Second, CDMRP includes in all levels the active participation of consumer reviewers — patients (or their caregivers) who are actually affected by the disease. This is of critical importance. VA offers no opportunity for similar involvement in research decision­making by the patients who are ultimately affected by such decisions. Finally, CDMRP has already shown its effectiveness with regards to other complex post-deployment, toxic exposure health conditions including traumatic brain injury (TBI) and Gulf War Illness (GWI), including through its emphasis on collaboration, treatment focus, and effective two-tiered peer review.”

We respectfully request that you provide the necessary resources in the FY20 DoD appropriations bill to establish this program. Furthermore, it is critical to the program’s success and accountability that it be a stand-alone program within the CDMRP and not be combined as a topic area within broader, less-targeted research programs. Our goal is not research for research’s sake, but the development of knowledge to guide recovery for veterans still suffering following their exposure to these airborne hazards. Thank you for your consideration of our request.