Will PTSD By Any Other Name Bring More Troops to Treatment?

by Aaron Levin From PsychiatryOnline

While two generals and two psychiatrists disagree over diagnostic language, they do agree about the crucial need to get troops with posttraumatic stress disorder into care.

The general wants to change one word. The psychiatrist wants to keep things the way they are. A Canadian who sees both sides of the argument may offer a way of satisfying both. 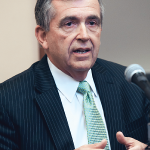 Part of Chiarelli’s job then was to lead the effort to reduce suicide in the U.S. Armed Forces and to expand access to mental health care for troops returning from Iraq and Afghanistan.

Moving combat-related stress reactions into the same category as bullet wounds would decrease stigma and lead more soldiers to accept treatment, said Chiarelli, now CEO of One Mind for Research, a neuroscience research advocacy organization. Stigma is a major barrier to seeking care, and a shift in terminology would lower that barrier, he said.

However, while “injury” might describe what happens to a soldier, the term was too imprecise for accurate diagnosis and treatment, responded Matthew Friedman, M.D., Ph.D., executive director of the Department of Veterans Affairs’ National Center for PTSD in White River Junction, Vt.

Chiarelli and Friedman appeared on a panel at APA’s 2012 annual meeting in Philadelphia in May, along with Gen. (Ret.) Romeo Dallaire of the Canadian Forces and Robert Ursano, M.D., chair of psychiatry at the Uniformed Services University of the Health Sciences in Bethesda, Md.

“Everyone would agree that anyone who lives through a traumatic event experiences traumatic stress, but not all will develop PTSD,” said John Oldham, M.D., APA’s outgoing president, who chaired the session. “So we have to distinguish between those who will require treatment and those who don’t. Much more needs to be done—just changing language isn’t enough.”

“PTSD is PTSD,” said Friedman. “To change it to PTSI would reverse 32 years of research and not reduce stigma or increase treatment seeking.”

The term used, however, also has to be applicable in nonmilitary events, such as the aftermath of Hurricane Katrina, the September 11 attacks, a Japanese tsunami, or cases of rape.

Psychiatrists and military leaders at APA’s annual meeting discussed whether posttraumatic stress disorder should be renamed posttraumatic stress injury as a way to get mental health care to the increasing number of returning troops showing symptoms of the disorder. Proponents argue that making it equivalent to a bullet wound would lessen the stigma of getting care (see story at right).

The problem is not just the stigma felt by soldiers but that held by their officers and their resistance to accepting any mental disorder or its consequence—depression, suicide, substance abuse, as well as PTSD—as a medical disorder, said Darrel Regier, M.D., M.P.H., director of APA’s Division of Research, vice chair of the DSM-5Task Force, and director of the American Psychiatric Institute for Research and Education.

“When we can show soldiers what happens in the brain, they’ll come in for help,” he said. “Something that occurs in the brain is not something to be ashamed of.”

Scans of brain injuries might also convince officers that their troops were not malingering, he added.

However, current scanning technology is not yet ready for the clinic, Regier pointed out in a later interview with Psychiatric News.

“Scans show group differences for patients with and without PTSD, but they are not sensitive or specific enough to use for individual diagnosis,” he said.

Dallaire, now a member of the Canadian Senate, headed the United Nations military mission to Rwanda at the time of the genocide there in 1994, an experience that induced his own case of PTSD, he said. The increased deployments of Canadian troops to the war in Afghanistan and peacekeeping operations in Africa, Cambodia, and the Balkans had serious effects on soldiers and their families, he realized. The injuries they sustained to the mind were as real as physical wounds but did not get the same recognition, he said.

“We must render to the troops the sense that this injury was honorable and not a sickness,” said Dallaire. “The troops saw a ‘mental health problem’ as pejorative, so we had to restate the injury in language that they could understand and not feel stigmatized so they could get help.”

Dallaire’s solution—now accepted by Canadian Forces—was to use “operational stress injury,” a term covering not just PTSD but other injuries to the mind, he said. The use of conventional diagnostic terms has not changed.

“That established a framework in which individuals could define themselves in an honorable position, seek support, and end the stigma from both the chain of command and from their peers,” said Dallaire.

Since 2008, Canada has awarded the Sacrifice Medal (equivalent to the Purple Heart) to soldiers with “mental disorders that are, based on a review by a qualified mental health practitioner, directly attributable to a hostile or perceived hostile action.”

Changing terminology is not enough, however. Changing military minds is another critical component.

“There is now a stigma in the chain of command if someone denigrates someone who’s been injured with PTSD or some other injury of the mind,” said Dallaire.

“The injury is not specific,” said Regier. “It’s what the injury did that produces the disorder, and it’s the consequence of the injury that needs to be accepted.”

“What we call that stress-related injury is a separate question,” he said. “The diagnosis needs to direct care, and it needs to improve the patient’s health. How to get those who need care into effective care is the goal of everyone on the panel.